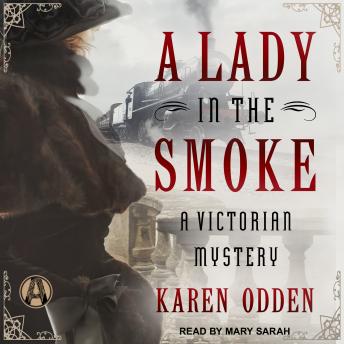 A Lady in the Smoke: A Victorian Mystery

Following a humiliating fourth Season in London, Lady Elizabeth Fraser is on her way back to her ancestral country estate when her train careens off the rails and bursts into flames. Though she is injured, she manages to drag herself and her unconscious mother out of the wreckage, and amid the chaos that ensues, a brilliant young railway surgeon saves her mother's life. Elizabeth feels an immediate connection with Paul Wilcox-though society would never deem a medical man eligible for the daughter of an earl.

After Paul reveals that the train wreck was no accident, and the inspector who tried to prevent it dies under mysterious circumstances, Elizabeth undertakes a dangerous investigation of her own that leads back to her family's buried secrets. Not only are her dowry and her reputation at stake; Paul's very life hangs in the balance when he is arrested for manslaughter. Now Elizabeth must risk everything for the man who has found a place in her heart. As the trial draws near, and Parliament prepares for a vote that will change the course of the nation, she uncovers a conspiracy that has been years in the making. But time is running out to see justice done.