Lady Knight: Book 4 of the Protector of the Small Quartet 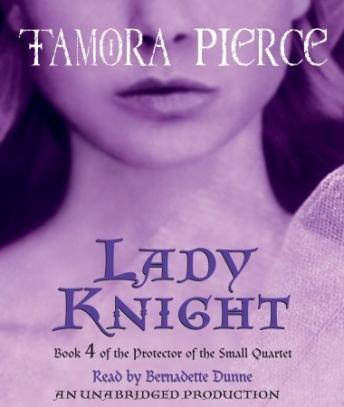 The stunning conclusion to the New York Times bestselling series from the fantasy author who is a legend herself: TAMORA PIERCE.

Victory is not always what it seems.

Keladry of Mindelan has finally achieved her lifelong dream of becoming a knight—but it’s not quite what she imagined. In the midst of a brutal war, Kel has been assigned to oversee a refugee camp. She’s sure it’s because Lord Wyldon still doesn’t see her as equal to the men. Nevertheless, she’s learning the importance of caring for people who have been robbed of their homes, wealth, and self-respect. Perhaps this battle is as important as the war with Scanra? When Kel has a vision of the man behind the horrific killing devices that her friends are fighting without her, will she honor her sworn duty . . . or embark on a quest that could turn the tide of the war?

More timely than ever, the Protector of the Small series is Anti-Bullying 101 while also touching on issues of bravery, friendship, and dealing humanely with refugees against a backdrop of an action-packed fantasy adventure.

'Tamora Pierce's books shaped me not only as a young writer but also as a young woman. She is a pillar, an icon, and an inspiration. Cracking open one of her marvelous novels always feels like coming home.'
—SARAH J. MAAS, #1 New York Times bestselling author

Lady Knight: Book 4 of the Protector of the Small Quartet