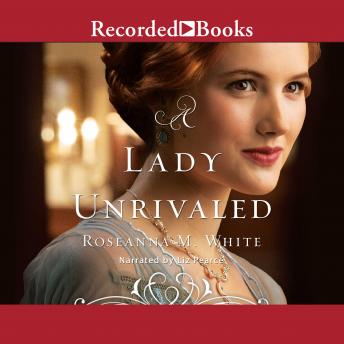 Lady Ella Myerston knows of the danger that haunts her brother, and she intends to put an end to it. While visiting her friend Brook, the true owner of the Fire Eyes diamonds, Ella accidentally gets entangled in an attempt to blackmail the dashing, newly reformed Lord Cayton. Will she become the next casualty of the alleged curse? White is quickly becoming the top name in Edwardian romance Lady Ella Myerston can always find a reason to smile--even if it's just in hope that tomorrow will be better than today. All her life everyone has tried to protect her from the realities of the world, but Ella knows very well the danger that has haunted her brother and their friend, and she won't wait for it to strike again. She intends to take action . . . and if that happens to involve an adventurous trip to the Cotswolds, then so much the better. Lord Cayton has already broken two hearts, including that of his first wife, who died before he could convince himself to love her. Now he's determined to live a better life. But that proves complicated when old friends arrive on the scene and try to threaten him into a life of crime. He does his best to remove the intriguing Lady Ella from danger, but the stubborn girl won't budge. How else can he redeem himself, though, but by saving her--and his daughter--from those dangerous people who seem ready to destroy them all?