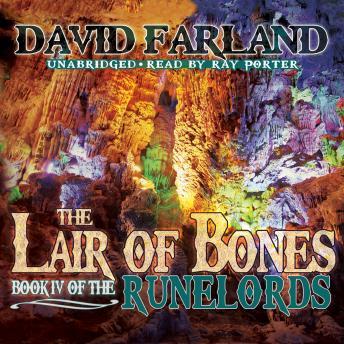 The Lair of Bones

Prince Gaborn, the Earth King, has defeated the forces arrayed against him each time before: the magical and human forces marshaled by Raj Ahten, who seeks immortality at any cost and has given up his humanity in trade; and the inhuman, innumerable, insectile hordes of the giant Reavers from under the Earth, whose unknowable motives are inimical to human life. Now there must be final confrontations, both on the field of battle, with the supernatural creature that Raj Ahten has become, and underground, in the cavernous homeland of the Reavers, where the sorcerous One True Master who rules them all lies in wait—in the Lair of Bones. The survival of the human race on Earth is at stake.

"The Runelords Saga comes to a gripping conclusion in David Farland's The Lair of Bones…Farland's imaginative use of magic and detailed world-building contribute to the impact…Gaborn is a flawed but likable hero whom readers will be sorry to leave behind. Fans of Robert Jordan and Terry Goodkind will enjoy Farland's Runelords."—Romantic Times