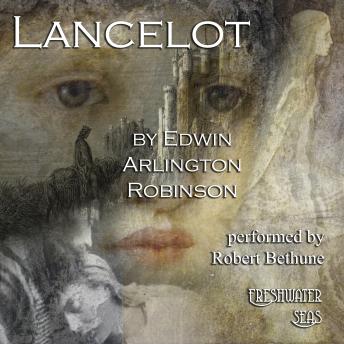 The beautiful, elegant, hearbreakingly sad story of Lancelot, Guinevere and Arthur is Ediwn Arlington Robinson's subject in his 1920 novella in verse, "Lancelot." His focus throughout is is on one side of the triangle, that of Lancelot and Guinevere. As in his previous Arthurian poem, "Merlin," he does not give us Malory's tales of jousts and tournaments; he sets his poem instead in the quiet moments of reflection, hope, anger, forgiveness, remorse and honesty that allow him to explore the meaning of this, one of literature's most enduring love stories, in the depths of the hearts and minds of his characters. Measured, elegiac, but always clear-eyed, he faces unflinchingly the agony of love that cannot be, and in so doing, breaks our hearts while satisfying our souls.

As a reviewer at Yale put it:

"Lancelot" is, in our estimation, the greatest single poem that has been written by an American poet. It is, in addition, one of the greatest Arthurian poems extant. It is as vast, or vaster in its conception than anything of Lord Tennyson's; and it is not marred by the Tennysonian softness. By contrast, however, neither is it exalted by anything like Tennysonian poetry. It is more restrained and nearer to earth—by which it suffers; it has more insight and more reality—by which it gains. Now that it is one of our memories, what we recall chiefly is a series of groups which are really moods: Gawaine and Lancelot in the garden, Lancelot and Guinevere in the garden, Gawaine and Bedivere and Arthur, Lancelot and the fire in Joyous Gard.

Lancelot sits there before the fire, seeing nothing; but

"Now and again he buried
A lonely thought among the coals and ashes
Outside the reaching flame and left it there,
Quite as he left outside in rainy graves
The sacrificial hundreds who had filled them."

In that moment of calm and despair was the climax of the play whose scene was Camelot. There was no hysteria, only calm. That is this poet's way.
--Yale Literary Magazine, October 1920, No. 760, p. 46.

This title is due for release on April 19, 2013
We'll send you an email as soon as it is available!