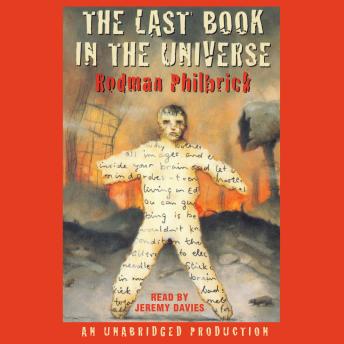 The Last Book in the Universe

This fast-paced action novel is set in a future where the world has been almost destroyed. Like the award-winning novel Freak the Mighty, this is Philbrick at his very best.

It's the story of an epileptic teenager nicknamed Spaz, who begins the heroic fight to bring human intelligence back to the planet. In a world where most people are plugged into brain-drain entertainment systems, Spaz is the rare human being who can see life as it really is. When he meets an old man called Ryter, he begins to learn about Earth and its past. With Ryter as his companion, Spaz sets off an unlikely quest to save his dying sister—and in the process, perhaps the world

Last Book in the Universe