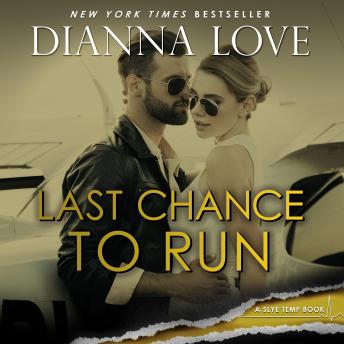 New York Times Bestseller Dianna Love's exciting romantic suspense that has been loved by readers all over the world.

To an undercover agent, Angel is a Person of Interest. Zane's interested.

Escaping the compound of a deadly international felon--with a fortune in rare, stolen coins hidden on her body--elite athlete Angel Farentino has to make the most important run of her life. Literally. With her father in prison, where he belongs, and a prior undeserved conviction hanging over her head, she has nowhere to turn and no one to trust. Definitely not law enforcement who railroaded her through a judicial nightmare. One step ahead of lethal men and dogs on her trail, she runs into the arms of a dark stranger willing to help her if she’d let him. But that would only get the sexy pilot killed.

Between figuring out who’s sabotaging his undercover work for the DEA and trying to save his baby sister from herself, Zane Jackson has enough on his plate. The last thing he needs is to get entangled with a woman who’s treading on the wrong side of the law. But when the long-legged distraction races into the middle of his operation and stows away on his plane, a primal need to protect forces Zane to risk everything, starting with his heart.

'Engrossing, thrilling and wonderfully steamy...a pitch-perfect suspense that will keep readers breathless from the first nerve-racking scene to the last shocking revelation.' ~ Bridget, The Romance Reviews

'I could not put this book down...Once again Dianna has thrilled my suspense taste buds with an extra dash of spicy romance.' ~ Trina727, After Hours Rendezvous