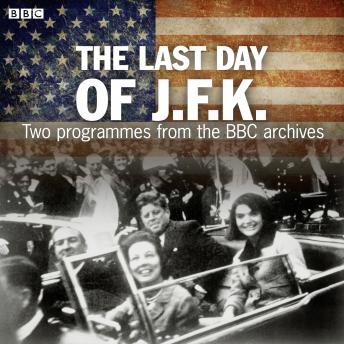 The Last Day Of JFK

Two BBC Radio programmes exploring President John F. Kennedy's shocking assassination on 22 November 1963. In Something Is Terribly Wrong, first broadcast in 2003, Alan Thompson charts the confusion and disbelief after the assassination. He returns to key sites in Dallas, and talks to eyewitnesses including Nellie Connally (ex-First Lady of Texas), Jim Leavelle (ex-Dallas detective), Jim Ewell (ex Dallas Morning News correspondent), Aubry Rike (ambulance driver/witness), and Ken Dowe, from Dallas radio station KLIF. Using rare, vivid archive material, he relives the events as they unfolded over three days that shocked the world. In Letter from America, first broadcast two days after the President's assassination, renowned broadcaster Alistair Cooke uses his weekly radio missive to reflect upon the legacy of John F. Kennedy, and to observe that the American nation feels it has been robbed of a brother.