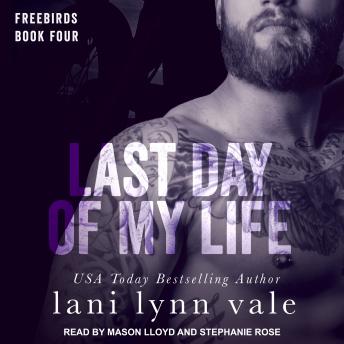 Last Day of My Life

She's the definition of lost. Doesn't know her name? Check. Cruelly beaten within an inch of her life? Check. No memory of anything that's happened since she woke up from that beating? Check. Losing a child she doesn't remember conceiving? Check. She hasn't felt anything but lost in a very long time. Then an old biker tells her danger is on the horizon. He sends her to a man that she instantly feels a connection with. A bone deep connection.

He's the definition of despair. After the death of his young wife while on a tour of duty in Afghanistan, he hasn't seen the appeal of participating in the world around him. He's lost the only thing he ever loved. He's been a shell of the man he once was. His only escape from reality is feeling the wind in his hair, going as fast as he can get his old Harley to take him. That's the only time he can push his demons back far enough to feel peace. That is until she screams his name.

Last Day of My Life