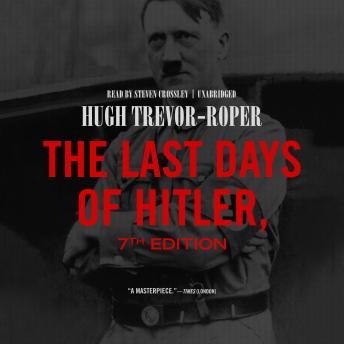 In late 1945 the fate of Adolf Hitler was a complete mystery. Missing for four months, he had simply vanished. Hugh Trevor-Roper, a British intelligence officer, was given the task of solving the mystery. With access to American counterintelligence files and German prisoners, his brilliant detective work proved finally that Hitler had killed himself in Berlin. It also produced one of the most fascinating history books ever written.

Originally published in 1947, The Last Days of Hitler tells the extraordinary story of those final days of the Thousand-Year Reich-a dramatic, carefully planned finale to a terrible chapter of history. "A carefully documented, irrefutable, and unforgettable reconstruction of the last days in April, 1945."-New Republic