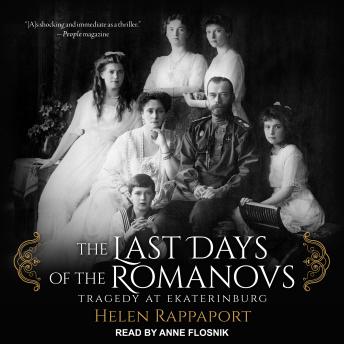 The Last Days of the Romanovs: Tragedy at Ekaterinburg

Helen Rappaport, an expert in the field of Russian history, brings you the riveting day-by-day account of the last fourteen days of the Russian Imperial family, in this first of two books about the Romanovs.

The brutal murder of the Russian Imperial family on the night of July sixteenth to seventeenth, 1918 has long been a defining moment in world history. The Last Days of the Romanovs reveals in exceptional detail how the conspiracy to kill them unfolded.

In the vivid style of a TV documentary, Helen Rappaport reveals both the atmosphere inside the family's claustrophobic prison and the political maneuverings of those who wished to save-or destroy-them. With the watching world and European monarchies proving incapable of saving the Romanovs, the narrative brings this tragic story to life in a compellingly new and dramatic way, culminating in a bloody night of horror in a cramped basement room.

Last Days of the Romanovs: Tragedy at Ekaterinburg