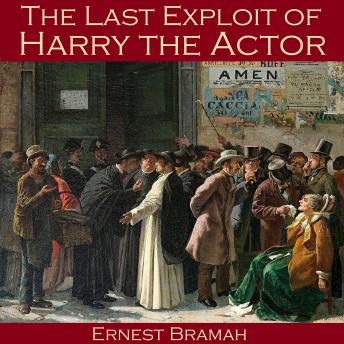 The Last Exploit of Harry the Actor

Ernest Bramah (1868-1942) was an English author of 21 novels and numerous short stories and features. His humorous works have been ranked with Jerome K. Jerome and W. W. Jacobs, his detective stories with Conan Doyle, his politico-science fiction with H. G. Wells, and his supernatural stories with Algernon Blackwood.

In his stories of detection, Bramah hit on the idea of a blind detective, Max Carrados, whose triumphs are all the more amazing because of his disability.

In this story, Max Carrados becomes suspicious when he visits a safe-deposit company in Piccadilly with his friend, Louis Carlyle, and becomes aware of an odd scene unfolding. He immediately suspects that a major heist is being planned....and begins to gather clues about what is about to happen.