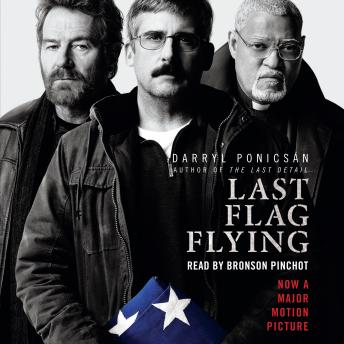 Darryl Ponicsan's debut novel The Last Detail was named one of the best of the year and widely acclaimed, catapulting him to fame when it was first published. The story of two career sailors assigned to escort a young seaman from Norfolk to the naval prison in Portsmouth, New Hampshire—and of the mayhem that ensues—it was made into an award-winning movie starring Jack Nicholson. Last Flag Flying, set thirty-four years after the events of The Last Detail, brings together the same beloved characters—Billy Bad-Ass Buddusky, Mule Mulhall, and Meadows—to reprise the same journey but under very different circumstances.

Now middle-aged, Meadows seeks out his former captors in their civilian lives to help him bury his son, a Marine killed in Iraq, in Arlington National Cemetery. When he learns that the authorities have told him a lie about the circumstances of his son's death, he decides, with the help of the two others, to transport him home to Portsmouth. And so begins the journey, centered around a solemn mission but, as in the first book, a protest against injustice and celebration of life too, at once irreverent, funny, profane, and deeply moving. Last Flag Flying is now a major movie, directed by Richard Linklater and starring Bryan Cranston, Steve Carell, and Laurence Fishburne.