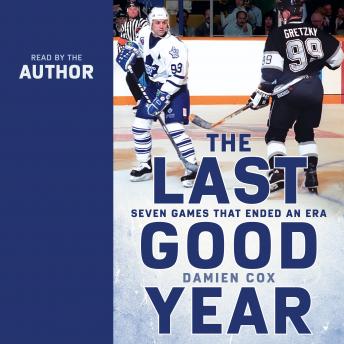 We may never see a playoff series like it again.

Before Gary Bettman, and the lockouts. Before all the NHL's old barns were torn down to make way for bigger, glitzier rinks. Before expansion and parity across the league, just about anything could happen on the ice. And it often did. It was an era when huge personalities dominated the sport; and willpower was often enough to win games. And in the spring of 1993, some of the biggest talents and biggest personalities were on a collision course.
The Cinderella Maple Leafs had somehow beaten the mighty Red Wings and then, just as improbably, the St. Louis Blues. Wayne Gretzky's Kings had just torn through the Flames and the Canucks. When they faced each other in the conference final, the result would be a series that fans still talk about passionately 25 years later.
Taking us back to that feverish spring, The Last Good Year gives an intimate account not just of an era-defining seven games, but of what the series meant to the men who were changed by it: Marty McSorley, the tough guy who took his whole team on his shoulders; Doug Gilmour, the emerging superstar; celebrity owner Bruce McNall; Bill Berg, who went from unknown to famous when the Leafs claimed him on waivers; Kelly Hrudey, the Kings' goalie who would go on to become a Hockey Night in Canada broadcaster; Kerry Fraser, who would become the game's most infamous referee; and two very different captains, Toronto's bull in a china shop, Wendel Clark, and the immortal Wayne Gretzky.
Fast-paced, authoritative, and galvanized by the same love of the game that made the series so unforgettable, The Last Good Year is a glorious testament to a moment hockey fans will never forget.