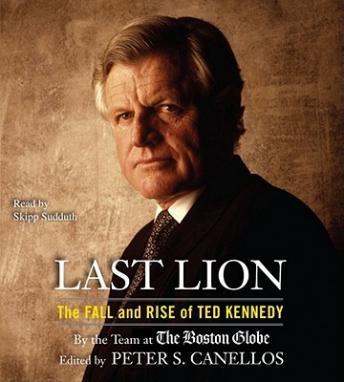 Last Lion: The Fall and Rise of Ted Kennedy

No figure in American public life has had such great expectations thrust upon him and fallen short of them so quickly. But Ted Kennedy, the gregarious, pudgy, and least academically successful of the Kennedy boys, became the most powerful senator of the last half century and the nation’s keeper of traditional liberalism.

As Peter S. Canellos and his team of Boston Globe reporters show in this intimate biography, Ted witnessed greater tragedy and suffered greater pressure than his siblings. He inherited a generation’s dreams and ambitions, and was expected to help confront his nation’s problems and to build a fairer society. But political rivals turned his all-too-human failings into a condemnation of his liberal politics. As the presidency eluded his grasp, Kennedy was finally free to become his own man. He transformed himself into a symbol of wisdom and perseverance.

Now, in two new chapters, Last Lion reveals how Kennedy battled cancer while helping Barack Obama bring about the biggest reform of health care in the nation’s history, and how he said good-bye to his family, friends, and enemies.

Perceptive and carefully reported, drawing from candid interviews with the Kennedy family, Last Lion captures magnificently the life, historic achievements, and personal redemption of Ted Kennedy, and offers a fresh assessment of his enduring legacy.

Last Lion: The Fall and Rise of Ted Kennedy