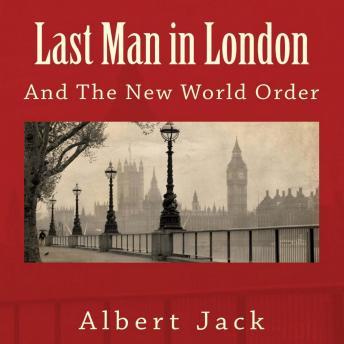 Last Man in London: And The New World Order

From the author of the internationally Bestselling Books - Red Herrings & White Elephants, What Caesar did for My Salad, Shaggy Dogs, Pop Goes the Weasel, They Laughed at Galileo & 9/11 Conspiracy
Originally written in 2013 the story chillingly predicting many of the great events between 2013 & 2017, such as the election of Donald Trump, the suicide attacks in Europe and the first calls for the banning of Islam.
Now re-released the story is narrated by its author Albert Jack

Imagine a world with no countries, no religion and no democracy. Imagine the fall of the Great Western Empire. Historically, most Empires created by man have risen and fallen during a period of around 500 years.
The Romans, Greeks, Egyptians, the Moors and the Ottomans all, in their turn, reigned supreme until apathy, arrogance and, laziness led to their downfall. However, Mankind would never become extinct as new societies inevitably replace existing social structures sooner or later.
By 2022 AD the great and so called democratic Western Empire, which began with the Age of Discovery during the 15th century, was tired, corrupt and had run out of ways of oppressing, cheating and taxing the societies it was supposed to represent, democratically.
For decades the pressure had been building, conflict had been growing and it became obvious that Democracy in the Western World was under threat. It had run its natural course and would be unworkable if the West were to survive.
Western values and the religion of Islam were non-compatible and the conflict became so intense that the system of democracy would fail. Ethnic tensions increased; violence and disorder followed and people longed for a return to their traditional values.
Chaos requires strong leadership. Men of authority. Men like Julius Caesar who could restore the natural order. Bring in a New Order. If the West is to survive then Democracy must be sacrificed.
The question is ‘what happens next?’

Last Man in London: And The New World Order