The Last Narco: Inside the Hunt for El Chapo, the World's Most-Wanted Drug Lord 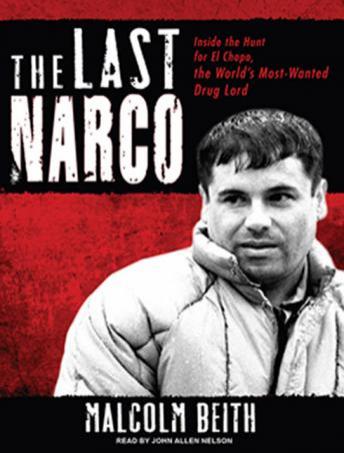 The dense hills of Sinaloa, Mexico, are home to the most powerful drug lord since Pablo Escobar: Joaquin 'El Chapo' Guzman. Responsible for uncountable murders since taking charge of the Sinaloa cartel in the 1990s, and a central figure in the recent surge in drug-related violence and bloodshed, Guzman is among the world's ten most wanted men-and also appeared on Forbes magazine's 2009 billionaire list. With his massive wealth, his army of professional killers, and a network of informants that reaches into the highest levels of government, catching Guzman was considered impossible-until now.

The all-out war between the Mexican cartels has isolated Guzman from former partners at the same time that the Mexican government has intensified its fight to restore order and end the terror. With El Chapo vulnerable as never before, Mexican and DEA authorities are closing in, and journalist Malcolm Beith, a Newsweek contributor who has spent years reporting on the drug wars, follows the chase with full access to senior officials and exclusive interviews with soldiers and drug traffickers in the region, including members of Guzman's cartel. The Last Narco combines fearless reporting with the story of El Chapo's legendary rise from a poor farming family to the 'capo' of the world's largest drug empire. Renowned for his charisma as much as for his brutality, Guzman's defiance of authorities and mythical exploits-including his escape from Puente Grande prison in a laundry cart-have made him a folk hero across Mexico.

Through Guzman's story, Beith uncovers the secret history of the Mexican cartels' rise to dominance, from their early years assisting the Colombians to the bloody power struggles and new barbarism of today. Guzman emerges as the last remaining narco of the old mold who ruled by principles and whose capture will signal the end of an era. The Last Narco is an essential book about one of the most pressing and dramatic stories in the news today-a true crime thriller happening in real time.

Last Narco: Inside the Hunt for El Chapo, the World's Most-Wanted Drug Lord