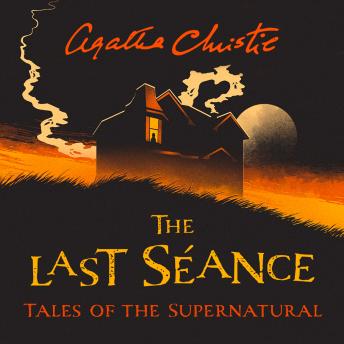 The Last Séance: Tales of the Supernatural by Agatha Christie

From the Queen of Crime, the first time all of her spookiest and most macabre stories have been collected in one volume.

'From behind the curtains there still sounded the terrible high long-drawn scream - such a scream as Raoul had never heard. It died away with a horrible kind of gurgle. Then there came the thud of a body falling...'

For lovers of the supernatural and the macabre comes this collection of ghostly and chilling tales from Agatha Christie. Acknowledged the world over as the undisputed Queen of Crime, in fact she dabbled in her early writing career with mysteries of a more unearthly kind - stories featuring fantastic psychic visions, spectres looming in the shadows, encounters with deities, eerie messages from the Other Side, even a man who switches bodies with a cat...

This haunting compendium gathers together all of Christie's spookiest and most macabre short stories, some featuring her timeless detectives Hercule Poirot and Miss Marple. Finally together in one volume, it shines a light on the darker side of Agatha Christie, one that she herself relished, identifying ten of them as 'my own favourite stories written soon after The Mysterious Affair at Styles, some before that'.

 Contains 20 stories:
The Last Séance  In a Glass Darkly  The Adventure of the Egyptian Tomb  SOS  The Fourth Man  The Idol House of Astarte  The Gipsy  Philomel Cottage  The Dream  The Lamp  Wireless  The Mystery of the Blue Jar  The Blue Geranium  The Wife of the Kenite  The Strange Case of Sir Arthur Carmichael  The Call of Wings  The Red Signal  The Flock of Geryon  The Dressmaker's Doll  The Hound of Death

Last Séance: Tales of the Supernatural by Agatha Christie