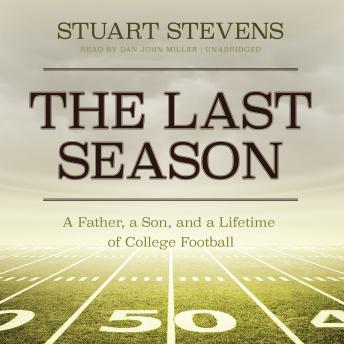 The Last Season: A Father, a Son, and a Lifetime of College Football

Fathers, sons, and sports are enduring themes of American literature. Here, in this fresh and moving account, a son returns to his native Mississippi to spend a special autumn with his ninty-five-year-old dad, sharing the unique joys, disappointments, and life lessons of Saturdays with their beloved Ole Miss Rebels.

In the fall of 2012, after working on a presidential campaign that suffered a devastating loss, Stuart Stevens realized that he and his ninety-five-year-old father had spent little time together for decades. His solution: a season of attending Ole Miss football games together, as they’d done when college football provided a way for his father to guide him through childhood—and to make sense of the troubled South of the time. Poignant, full of heart, irreverent, and often hilarious, The Last Season is a powerful story of parents and children and the importance of taking a backward glance together while you still can.

“Through the lens of college football, Stuart Stevens has produced a poignant tale of fathers, sons, race, and growing up in the South during the late 1960s. Besides being a delightful read, it is a reminder of the joy of relishing what is meaningful in life.”—Walter Isaacson, #1 New York Times bestselling author of Steve Jobs

Last Season: A Father, a Son, and a Lifetime of College Football