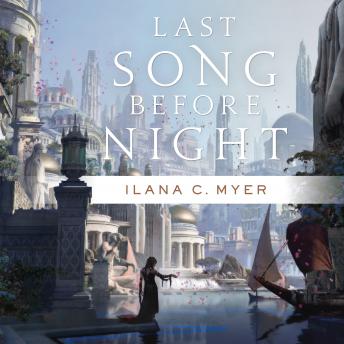 Last Song Before Night: The Harp and Ring Sequence #1

#1 of The Harp and Ring Sequence

A high fantasy following a young woman's defiance of her culture as she undertakes a dangerous quest to restore her world's lost magic in Ilana C. Myer's Last Song Before Night.

Her name was Kimbralin Amaristoth: sister to a cruel brother, daughter of a hateful family. But that name she has forsworn, and now she is simply Lin, a musician and lyricist of uncommon ability in a land where women are forbidden to answer such callings-a fugitive who must conceal her identity or risk imprisonment and even death.

On the eve of a great festival, Lin learns that an ancient scourge has returned to the land of Eivar, a pandemic both deadly and unnatural. Its resurgence brings with it the memory of an apocalypse that transformed half a continent. Long ago, magic was everywhere, rising from artistic expression-from song, from verse, from stories. But in Eivar, where poets once wove enchantments from their words and harps, the power was lost. Forbidden experiments in blood divination unleashed the plague that is remembered as the Red Death, killing thousands before it was stopped, and Eivar's connection to the Otherworld from which all enchantment flowed, broken.

The Red Death's return can mean only one thing: someone is spilling innocent blood in order to master dark magic. Now poets who thought only to gain fame for their songs face a challenge much greater: galvanized by Valanir Ocune, greatest Seer of the age, Lin and several others set out to reclaim their legacy and reopen the way to the Otherworld-a quest that will test their deepest desires, imperil their lives, and decide the future.

Must admit that on this one, i had to give up. - It got to the point where i got annoyed listening to it. the book keeps going around in circles, round and round we go. Using soooooo many words to say nothing. In short, its the first time i had to give up on a book ..... :-/ The narrator does a good job though

It was enjoyable. I would recommend it.