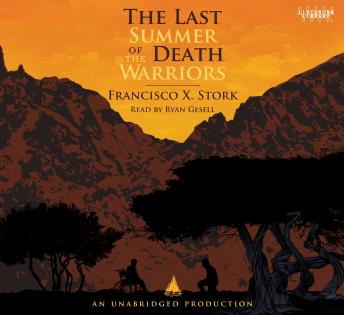 The Last Summer of the Death Warriors

DEATH
It surrounds Pancho. His father, in an accident. His sister, murdered. His own plans to trace her killer. And D.Q.— a guy Pancho’s age who’s dying of cancer.
That is, if he’ll ever shut up.

LOVE
D.Q. is writing the Death Warrior Manifesto, a guide to living out his last days fully. He needs just one more thing: the love of the beautiful Marisol. But as Pancho tracks down his sister’s murderer, he finds himself falling for Marisol as well. . . .

FAITH
And choices that seemed right and straightforward become tender, tentative, real. While D.Q. faces his own crisis of doubt, Pancho is inexorably drawn to a decision: to revenge his sister and her death, or to embrace the way of the Death Warrior and choose life.

Last Summer of the Death Warriors