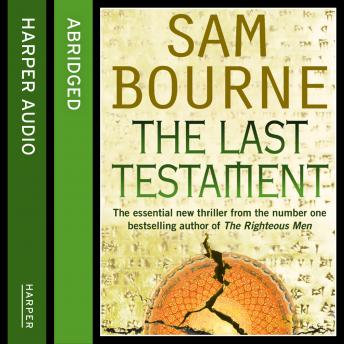 From the Number One bestselling author of The Righteous Men comes this staggering religious conspiracy thriller. The Last Testament: It was written. It was lost. It will save us all.

April 2003: as the Baghdad Museum of Antiquities is looted, a teenage Iraqi boy finds an ancient scroll in a long-forgotten vault. He takes it and runs off into the night ...

Several years later, at a peace rally in Jerusalem, the Israeli prime minister is about to sign a historic deal with the Palestinians. A man approaches from the crowd and seems to reach for a gun - bodyguards shoot him dead. But in his hand was a note, one he wanted to hand to the prime minister.

The shooting sparks a series of tit-for-tat killings which could derail the peace accord. Washington sends for trouble-shooter and peace negotiator Maggie Costello, after she thought she had quit the job for good. She follows a trail that takes her from Jewish settlements on the West Bank to Palestinian refugee camps, where she discovers the latest deaths are not random but have a distinct pattern. All the dead men are archaeologists and historians - those who know the buried secrets of the ancient past.

Menaced by fanatics and violent extremists on all sides, Costello is soon plunged into high-stakes international politics, the worldwide underground trade in stolen antiquities and a last, unsolved riddle of the Bible.

This title is due for release on November 19, 2007
We'll send you an email as soon as it is available!