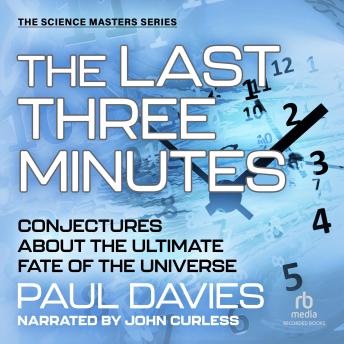 The Last Three Minutes: Conjectures about the Ultimate Fate of the Universe

Ragnarok. Armageddon. Doomsday. Since the dawn of time, man has wondered how the world would end. In The Last Three Minutes, Paul Davies reveals the latest theories. It might end in a whimper, slowly scattering into the infinite void. Then again, it might be yanked back by its own gravity and end in a catastrophic 'Big Crunch.' There are other, more frightening possibilities. We may be seconds away from doom at this very moment. Written in clear language that makes the cutting-edge science of quarks, neutrinos, wormholes, and metaverses accessible to the layman, The Last Three Minutes treats readers to a wide range of conjectures about the ultimate fate of the universe. Along the way, it takes the occasional divergent path to discuss some slightly less cataclysmic topics such as galactic colonization, what would happen if the Earth were struck by the comet Swift-Tuttle (a distinct possibility), the effects of falling in a black hole, and how to create a 'baby universe.' Wonderfully morbid to the core, this is one of the most original science books to come along in years.

Last Three Minutes: Conjectures about the Ultimate Fate of the Universe

This title is due for release on July 20, 2018
We'll send you an email as soon as it is available!