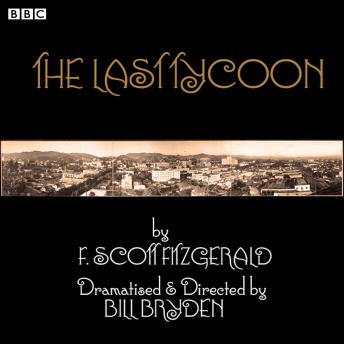 F Scott Fitzgerald's last and unfinished novel, a gorgeous, excruciating, heady tale based on his painful experiences working as a Hollywood screenwriter. Haunted by the death of his wife, 1930s studio head Monroe Stahr works 18-hour days, crammed with meetings, set visits, script brainstorms and screenings. The 'last of the princes', he's making the studio millions and seems bulletproof. Then one day, an earthquake breaks two water mains, sending a river of water through the studio. And with it, the huge head of the goddess Shiva - a film prop. Inspecting the damage, Stahr sees the head float by and on it two women, one of them the mesmerising Kathleen. It's the beginning of a love affair that will destroy him Stars Aiden Gillen, Jack Shepherd and Charlotte Emmerson. Producer: Laurence Bowen. Adapted and directed by Bill Bryden. Production Associate: John Tams. Sound Design: Mark Smith. A Feelgood Fiction production for BBC Radio 4. 'Gatsby may be great but this version of The Last Tycoon is awesome.' (Jane Anderson, RadioTimes)

This title is due for release on May 25, 2013
We'll send you an email as soon as it is available!