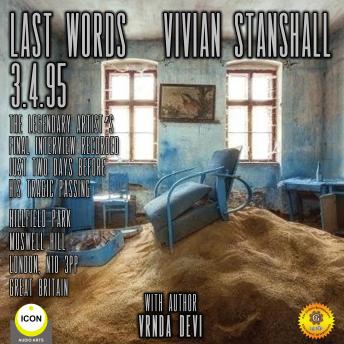 The interview
1. On rice putting.
2. Vivian's art (painting and drawing).
3. The book The Beatles: A Celebration.
4. How are the Bonzos doing? On Rodney, Roger, Larry and Neil.
5. On friend and author Geoffrey Giuliano.
6. Vivian has no interest in the past.
7. Stanshall's thoughts on the music of the 1990s.
8. On Vivian's writing.
9. On punk and rap. Vivian's ultimate disappointment with these emerging art forms.
10. Vivian respects people who simply "do it".
11. Rupert enjoys listening to Cream. There was depth to the group.
12. Vivian listens to Link Wray and Dan Beefheart.
13 Vivian's surprise at the continual rereleasing of the Bonzo dog band's catalog.
14. Vivian's worries concerning formula music.
15. Vrnda: "the Bonzos were different and very special."
16. A brief discussion on the B-52s.
17. On Pete Brown, the inventive lyricist for Cream.
18. Vrnda on Ginger Baker finally cleaning up from drugs.
19. Vrnda meeting Jack Bruce for an interview at the Savoy in London.
20. The tragic death of Conor Clapton.
21. Vivian's relationship with Cream. Tales from a 1966 gig. Ginger is a terrifying man. Roger Ruskin Spear accidentally blows up Ginger's kit.
22. Riding in Cream's car when a half-naked Ginger attacked a lorry driver.
23. The Bonzos playing with Cream.
24. Many groups did not enjoy following the Bonzos.
25. Eric Clapton would often decorate various shirts in the dressing room with fabric pens.
26. Cream was "dreaming" together on stage.
27. Vivian was closer to Clapton than the rest of the group.
28. Teach yourself Swahili. Vivian and Ginger discuss Africa.
29. On Keith Moon and other drummers.
30. Ginger was in reality an abstract drummer.
31. Art cannot really be translated into words.
32. Vivian is not really interested in synthetic music.
33. On Vivian's personal drug problems. He never took LSD or heroin on the advice of Steve Winwood. He comments on his addiction to Valium.