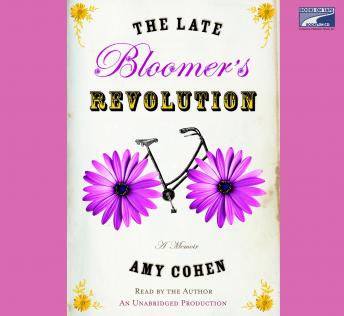 Amy Cohen always imagined that by age thirty she would be juggling a thriving career, a devoted English husband, and two adorable children who had shag haircuts and a room in their loft where they could play the drums. But at thirty-five, as she struggled to come to terms with the loss of her adored mother, she found herself “between jobs” (she’d been fired), “between boyfriends” (she’d been dumped), and “between apartments.”

Amy felt as if her life was behind schedule...way behind. The more time passed, the more difficult it became for her to believe that she would ever come into her own. The only thing that made her feel hopeful–and even determined–was the idea that she might be a Late Bloomer. She kept telling herself that things would change, that everything would happen for her, just not in the time she expected.

As it turns out, she was right. Fresh, funny, and above all, real, THE LATE BLOOMER’S REVOLUTION is an irresistible memoir, and the perfect audiobook for anyone who hopes, as George Eliot so perfectly put it, that “it’s never too late to be what you might have been.”