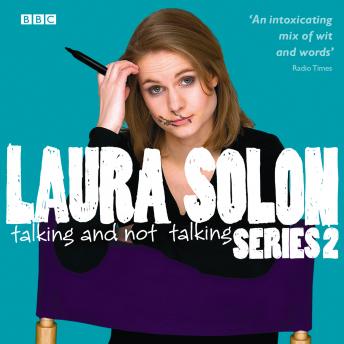 The complete second BBC Radio 4 series by Perrier Award winner Laura Solon. Laura Solon won the Perrier Award at the Edinburgh Festival in 2005 with her sensational debut show. She now returns to Radio 4 with a new series of her bittersweet comedy show packed with characters, monologues and sketches from this extraordinary writer and performer. There will be talking, not talking, some stories, and a lion made out of china. Aided by Rosie Cavaliero, Ben Moor and Ben Willbond, Laura Solon is a remarkable talent with an astonishing eye for detail and ear for voice. ‘The writing is as fresh as a cowslip, as sharp as a kitchen-knife, and sometimes as coarse as a fishwife’ - Telegraph '... moments of twisted genius' - Observer 'Talking and Not Talking is very clever' - Times 'Solon's series stood out for its self-assurance, its unforced oddness...' - Independent 'She's a remarkable talent' - Guardian 'Laura Solon is the new Catherine Tate' - Mail on Sunday