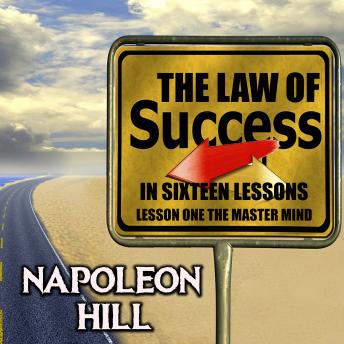 The Law of Success in Sixteen Lessons: Lesson One the Master Mind

The Law of Success in 16 Lessons was initially published in 1928 as a multi-volume correspondence course.
According to Hill, the work was commissioned at the request of Andrew Carnegie, at the conclusion of a multi-day interview with Hill. It was allegedly based upon interviews with over 100 American millionaires, including self-made industrial giants such as: Henry Ford, J. P. Morgan, John D. Rockefeller, Alexander Graham Bell and Thomas Edison, over 500 of the most successful people of the planet across nearly 20 years. The Law of Success was first presented as a lecture, and was delivered by its author in many major cities and in many smaller localities throughout the United States over a period of more than seven years.
Each of these editions were given to many of the most successful businessmen of the day, self-made billionaires, inventors, Presidents, and others who shaped and built modern America; all of whom had contributed to the book's content.

Law of Success in Sixteen Lessons: Lesson One the Master Mind