Lawless: Originally Published as The Wettest County in the World 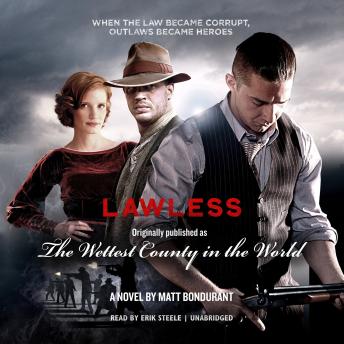 Based on the true story of his grandfather and two granduncles, Matt Bondurant's novel is a gripping tale of brotherhood, greed, and murder. The Bondurant Boys were a notorious gang of roughnecks and moonshiners who ran liquor through Franklin County during Prohibition and after. The brothers played a central role in a major conspiracy trial and its violent end. In 1935, Sherwood Anderson, working on a magazine story, finds himself driving along the dusty red roads trying to find the brothers and break the silence that shrouds Franklin County. In vivid, muscular prose, Matt Bondurant brings these men-their dark deeds, their long silences, their deep desires-to life. His understanding of the passion, violence, and desperation at the center of this world is both heartbreaking and magnificent.

“Bondurant endows his gritty story with all the puzzle-solving satisfactions of a mystery. It’s a gripping, relentless tale, delivered in no-nonsense prose.”--Publishers Weekly (starred review)

Lawless: Originally Published as The Wettest County in the World