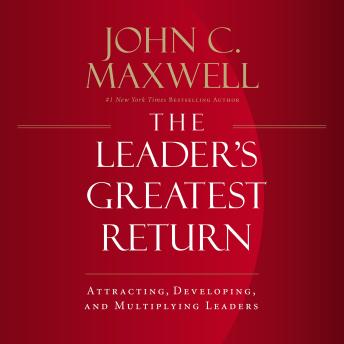 What is the greatest return on a leader’s time?

After leaders have invested in their own leadership growth, what is the best way to accomplish their vision and grow their organizations? Develop leaders! The more leaders an organization has and the better equipped they are to lead, the more successful the organization and all of its leaders.

Number one New York Times bestselling author John C. Maxwell is often identified as the most influential leadership expert in the world. In the last twenty-five years, he has grown from equipping a handful of leaders in one organization to developing millions of business, government, and nonprofit leaders in every country around the world.

In The Leader’s Greatest Return, Maxwell shares the most important lessons he’s learned about the leadership development process over the last quarter century. He instructs listeners in how to

This is where leaders really experience the compounding value of developing leaders and go to the highest levels of leadership themselves.

Anyone who wants to take the next step in their leadership, build their organization or team today, and create their legacy for tomorrow needs to listen to The Leader’s Greatest Return.