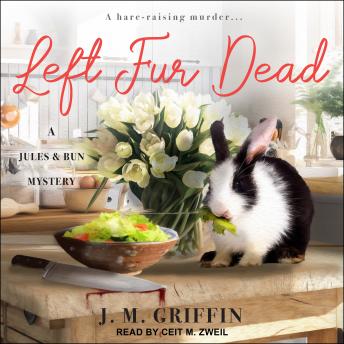 On Fur Bridge Farm, Jules cares for rescued rabbits. But when a killer strikes, she'll need a rabbit to rescue her . . .

Juliette 'Jules' Bridge prides herself on the tender rehabilitation she provides for injured or abused rabbits on her New Hampshire rescue farm, but she has a very special relationship with one bunny in particular. Bun is a black-and-white rabbit who happens to have the ability to communicate through mental telepathy. Once she got over the shock, Jules found her furry friend had a lot to say.

One frigid March morning on their walk together, Bun spots a body. The police identify the frozen stiff as Arthur Freeman, a.k.a. Arty the Mime. Jules and Arty knew each other on the children's party circuit, where he'd perform magic tricks and she had an educational rabbit petting pen. With Bun egging her on, Jules decides it's time they hop to it and put their heads together to discover who silenced the mime. But their investigation leads them down a rabbit hole of more suspects and lies, while a killer sets a trap for them . . .