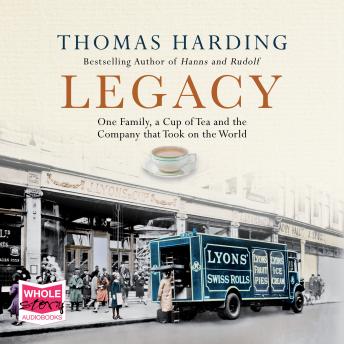 Legacy: One Family, a Cup of Tea and the Company that Took On the World

A panoramic new history of modern Britain, as told through the story of one extraordinary family, and one groundbreaking company.

In the early 1800s Lehmann Gluckstein and his family escaped the pogroms of Eastern Europe and made their way to Whitechapel in the East End of London. There, starting with nothing, they worked tirelessly to pull themselves out of poverty, creating a small tobacco factory that quickly grew to become the largest catering company in the world: J. Lyons. For over a century, Lyons was everywhere. Its restaurants and corner houses were on every high street, its coffee and tea in every cup, its products in every home. The company transformed the way we eat, drink and are entertained - democratising luxury and globalising our tastes. A story of the virtue of hard work, perseverance and an indomitable spirit in the face of repeated obstacles.
"Endlessly fascinating and hard to put down. I read it all in one sitting, enjoying the colour and grandeur ... Full of character and characters, this is a tour de force." JULIA NEUBERGER

Legacy: One Family, a Cup of Tea and the Company that Took On the World