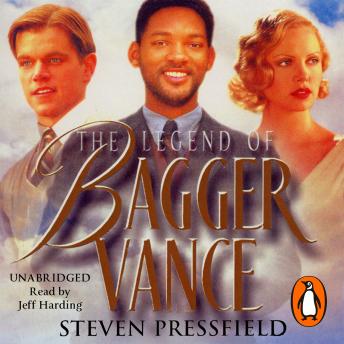 The Legend Of Bagger Vance

In the Depression year of 1931, on the golf links at Krewe Island off Savannah's windswept shore, two legends of the game - Bobby Jones and Walter Hagen - meet for a mesmerizing thirty-six hole showdown. They are joined by another player, a troubled war hero called Rannulph Junah. But the key to the outcome lies not with these golfing titans but with Junah's caddie and mentor, the mysterious, sage and charismatic Bagger Vance - for he is the custodian of the secret of the Authentic Swing...
Written in the spirit of Bernard Malamud's The Natural and sharing the magic of the celebrated Kevin Costner film Field of Dreams, Steven Pressfield's first novel - never before published in the UK - reveals the true nature of the game. Page-turning, spellbinding and affecting, it is a novel for golfers and non-golfers alike - a story in which the search for the Authentic Swing becomes a metaphor for the search for the Authentic Self.
'A marvellous, life-affirming book' Mark McCormack
'Golf and mysticism...a dazzler and a thought-provoker' Los Angeles Times
'Good stuff...a philosophical fantasy imagined on a golf course, heavy with fog, storm, fireworks and the howling winds of supernatural forces' New York Times Book Review
'Memorable...a page-turner...golf played a foot or so from Alice's looking glass, with mystical realms poised to engulf the reader at every turn' Sports Illustrated