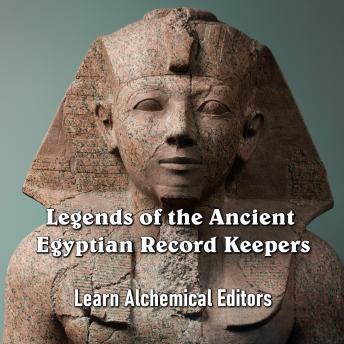 Legends of the Ancient Egyptian Record Keepers: As told by their Unique Hieroglyphic Literature

This Book tells of the legends of the Gods of ancient Egypt, legends circulated during the 'morning of the world' as described by the Egyptians, originally carved in stone, and written on papyrus, preserved for millennia until now.

Although this Book is intended to arouse the public's interest in the religion and civilization of ancient Egypt, it also fuels the imagination on the lost knowledge of the Egyptians.

Although the Book is intended for the layman, each piece of ancient literature has notes provided for the more scientific reader. In these accounts, the origin of the legend, the Book, or books in which the original may be found, and the papyrus texts have been translated into one of the modern languages ​​by various great scholars in various languages of the present time. There are other multitudes of translations that can be seen in the libraries of specialists; many of these, however, are of use only to those who study the Egyptian language and literature.

The order of the stories is thus: First come the legends of various gods, then the legends of Osiris and the deities associated with him, and finally the legends of Ra. In the end, you build a fascinating picture in your mind of the legends and a brief synopsis of all the gods that appear in them.

Legends of the Ancient Egyptian Record Keepers: As told by their Unique Hieroglyphic Literature