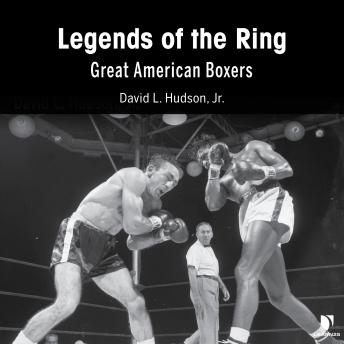 Legends of the Ring: The Great American Boxers

The definitive series on America's boxing greats by a renowned boxing expert, author of over 40 books, and world-champion boxing judge.

No sport is more enthralling than boxing. From bare-knuckle boxer John L. Sullivan in the late 1800s to the ferocious fists of "Iron" Mike Tyson in the 1980s, the sport of boxing has shaped American culture for more than a century. The so-called "sweet science" has captured our imaginations with the culture shock of legendary Jack Johnson, the worldwide phenomenon of Muhammad Ali, and a whole cast of colorful characters.

As famed boxing announcer Larry Merchant once said, boxing is the "theater of the unexpected. " Its storied history has seen momentous bouts, the breakdown of racial barriers, and fights of the century.

In this 18-part series, the inimitable David L. Hudson, Jr. , takes you on a thrilling ringside ride. You'll explore the rich history of the sport, its greatest heavyweight champions, controversial decisions, historic upsets, and much more.

You don't want to miss this revelatory, no-holds-barred exploration of boxing.

Legends of the Ring: The Great American Boxers