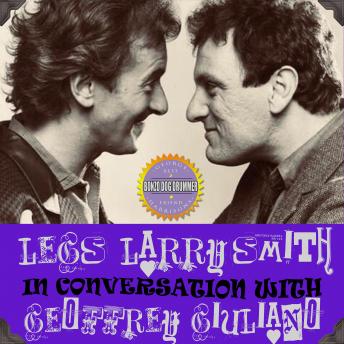 Author Geoffrey Giuliano and Bonzo Dog man 'Legs' Larry Smith had a professional relationship that spanned six wry, weird years in the early 1980s. Together they crafted a cockeyed film script for Giuliano's firm, intended for George Harrison's Handmade Films, entitled Half of Larry's Lunch, which, unfortunately, never made it to the screen and was eventually dropped. With concentrated work on the project conducted in pastoral Henley-on-Thames, Oxfordshire, and Toronto, the two men spent untold months living and working together. Only recently was the interview and other material used in the production of this unique audiobook discovered after being lost for over three decades.
With a lively, fairly bizarre interview between the two, an oddly amusing collection of Henley street interviews conducted by Geoffrey, and other Giuliano-penned musical odds and ends, here is a rare inside look at not only the unlikely relationship between these two talented men but also a breakdown of the creative process in its rawest and most primal form. An audio biographical must for all pop and rock fans, Bonzo Dog freaks, film buffs, and university and school systems.
Series producer Avalon Giuliano in New York
Produced by Alex Franchi in Milan
Edited and mixed by Macc Kay in Bangkok
ICON intern Eden Giuliano
Music by AudioNautix