Leland Stanford: The Life and Legacy of the Railroad Executive Who Became California's Governor and the West's Most Famous Robber Baron 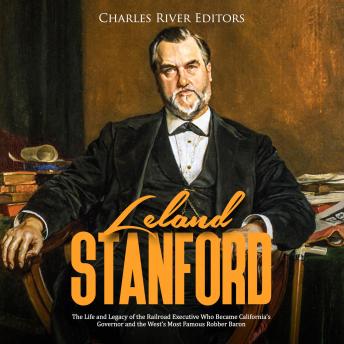 The technology that culminated in the Transcontinental Railroad’s completion changed the life of every resident in America by connecting the two coasts, not only in the mind, but by the clock. In tandem with that, a new tide of powerful American industrialists had their way, to the benefit and consternation of the general public, and while decrying the avarice of steel and railroad giants, well-to-do politicians, and titans of the banking system back in the East, the West received civic blessings as well. These included the first rail connection across the bulk of the continent, flourishing local economies in the major cities, and the niceties of the East Coast that included previously unthinkable universities.

One man among four major industrialists came to dominate the railroad extending from the west to Promontory, Utah more than any other. Whether he was the most capable is open to debate, but he made the essential investment at the most crucial moment. For this, he was given the keys to the entire industry in the West and sat atop Nob Hill as the financial king of San Francisco. In the process, he would become California’s governor, and he would wind up lending his name to one of the country’s most prestigious universities. That man was none other than a native New Yorker named Leland Stanford.

Leland Stanford: The Life and Legacy of the Railroad Executive Who Became California’s Governor and the West’s Most Famous Robber Baron chronicles the remarkable life of Stanford, and the various things he did on the way to becoming one of the Gilded Age’s most famous men.

Leland Stanford: The Life and Legacy of the Railroad Executive Who Became California's Governor and the West's Most Famous Robber Baron