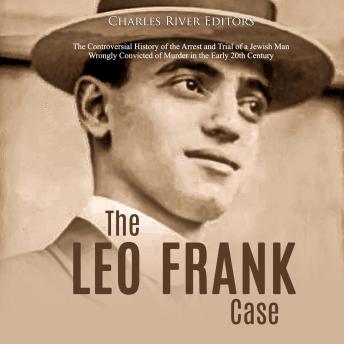 The Leo Frank Case: The Controversial History of the Arrest and Trial of a Jewish Man Wrongly Convicted of Murder in the Early 20th Century

In 1913, Mary Phagan, a young Georgia factory girl and the daughter of tenant farmers, was raped and killed, and suspicion fell upon Leo Frank, the Jewish-American factory manager, who was subsequently arrested, tried, and convicted of her murder based on the thinnest of circumstantial evidence. The entire case against Frank rested on the testimony of the factory janitor, Jim Conley, despite the fact Conley had been arrested almost immediately after Frank when he was spotted washing what appeared to be blood off his clothes. Subsequent investigations determined that Conley had written notes found by Phagan’s body, and Conley’s testimony explained this extremely incriminating evidence away by claiming Frank had dictated the notes to him to write down before they moved the body to the location it was discovered. Modern historians now believe Conley committed the murder himself, but based on his testimony, Conley only received a sentence of one year for being an accomplice after the fact.

The conviction was controversial enough in its day that Georgia Governor John M. Slaton commuted Frank’s death sentence, which stirred up such a frenzy that a mob driven by their prejudices took what they saw as justice into their own hands. The result was a stark reminder of the roles that race, class, and religion played in the South during the beginning of the 20th century.

The Leo Frank Case: The Controversial History of the Arrest and Trial of a Jewish Man Wrongly Convicted of Murder in the Early 20th Century examines the events that led up to the trial, how it was conducted, and the horrible aftermath.

This title is due for release on February 17, 2020
We'll send you an email as soon as it is available!