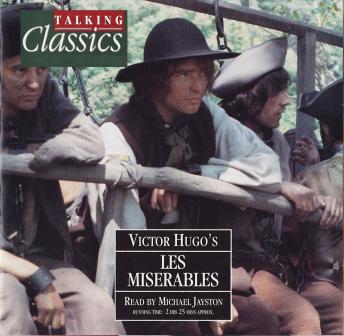 Les Miserables is part thrilling narrative and part social document of life in early 19th-century France. With Valjean, the reader descends into a human hell where suffering and injustice are a way of life. Through his characters, Hugo graphically details the plight of the wretched and the vulnerable. He writes with insight and passion, like that equally great 19th-century commentator and novelist, Charles Dickens. But regardless of its grim subject, Hugo's book is one of hope, a means of proclaiming his belief in the innate goodness of humanity, despite all.
1. THE OUTCAST. One evening in 1815, a tough-looking man approaches the town of Digne, longing for a meal. He is turned away from the inn when his identity is revealed, for Jean Valjean is an ex-convict. Refused lodging even at the local jail, Valjean finally tries a house by the cathedral. Surprisingly, its elderly bishop gives him shelter. That night, Valjean steals some silver and vanishes. Next morning, three gendarmes return Valjean and the silver to the bishop, who covers up for him. The clergyman tells Valjean that he has been saved from evil, and now he must do only good.

2. CROSSED DESTINIES. At Montfermeil, Madame Thénardier, an innkeeper's wife, is approached by Fantine, a young woman who needs someone to look after her child, Cosette, while she seeks work. Monsieur Thénardier agrees, at a price, and Fantine leaves for her home town Montreuil-sur-Mer. Here Père Madeleine, an enigmatic newcomer, has so transformed the local bead industry that he becomes mayor. Javert, the police inspector, regards Madeleine with deep suspicion, suspecting - rightly - that he is the convict Valjean. Fantine finds work in Madeleine's factory but cannot keep up with the Thénardiers' ugly demands for money to keep Cosette. Desperate to support her child, she becomes a prostitute.

3. REVELATION. Javert orders the imprisonment of Fantine for assaulting a citizen and ignores her protests that she was provoked. Madeleine uses his power as mayor to order her release. He takes her, now feverish, to the infirmary. Javert then reveals that he had thought Madeleine to be the convict Valjean, but that a 'Valjean' has been arrested in Arras. The news shocks Madeleine. At the court in Arras, he saves the wrongly accused man by declaring his own true identity.

4. A MAYOR DISGRACED. In the infirmary, Fantine is being tended by Sister Simplice. The sick woman is waiting for Madeleine to bring Cosette to her. Instead, he appears alone, pursued by Javert who is intent on capturing his prey. Valjean begs Javert for three days' grace to fetch Cosette, but he refuse and abuses Fantine, who dies when she realize that her daughter is not there. Valjean lets himself be arrested and Montreuil, amazed at his downfall, soon has nothing good to say about its ex-mayor. Only the old concierge keeps faith. After Valjean escapes from Javert's custody, he goes to her with a note for Sister Simplice, leaving his money to the poor.

5. A NEW START. Valjean is recaptured and sent to a prison ship, where he apparently drowns saving a sailor. However, Valjean has not died but escaped. He rescues Cosette, starts a new life in Paris under the name of Fauchelevent and brings the child up as his daughter. She grows up and, unknown to Valjean, falls in love with the penniless Marius Pontmercy. As revolution threatens Paris, Valjean decides to leave. This prompts Marius to ask his estranged grandfather, Gillenormand, for his blessing on his marriage to Cosette. He refuses and Marius returns to find Cosette has already left. In despair, he goes to join the rebels on the barricades.

6. AT THE BARRICADES. As Marius prepares to fight and die, Valjean, by chance, discovers his relationship with Cosette. Keeping this knowledge to himself, he takes a musket and goes to confront Marius. At the barricades, he also finds Javert, bound to a pillar as a police spy and destined to be used as a hostage. When Marius vouches for him, Valjean joins the rebels. As they are attacked, they decide to execute Javert and leave Valjean to kill him. Instead, Valjean secretly cuts Javert free, before rejoining the rebels.

7. ESCAPE. Marius is wounded in the assault on the barricades and collapses into Valjean's arms. Valjean carries the young man down a manhole and through the sewers of the city until they come out on the banks of the Seine. On the way, he discovers a note giving the address of Marius's grandfather. By the side of the Seine, Valjean meets Javert and surrenders to him, but asks for his help in taking Marius to his grandfather. When they return to Valjean's lodgings, Javert lets his prisoner go. Then, aghast at what he has done, he throws himself into the river and drowns.

8. RECONCILIATION. Marius gradually recovers from his wounds. His grandfather, now less cynical, approves of his marriage plans, and Valjean has been calling every day. Valjean fabricates a 'dead' family for Cosette, revealing that he is not her real father but her guardian. Marius wants to know the identity of his saviour from the barricades, but Valjean stays silent. He is tortured by his own past and, the day after the wedding, he finally blurts out the truth to Marius, who is horrified. Valjean returns to his lonely house where he falls ill. After some weeks, Marius and Cosette call on him and find him very frail. But all is finally forgiven and Valjean dies at peace.