LET ME IN: a Japanese American Woman Crashes the Corporate Club 1976-1996 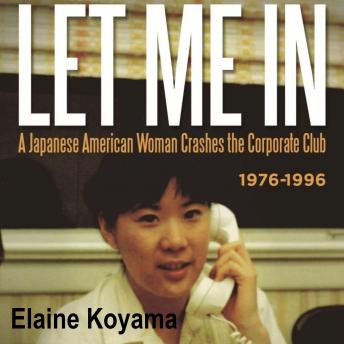 From the moment Elaine Koyama was hired as a management trainee at agri-business giant Cargill, Inc. she found herself entangled in the endless fight to wedge herself through the doors the women's movement opened. As men and women all over the country began to examine and redefine the boundaries of their roles, Koyama, fresh out of Stanford, navigated farmyard sales calls, meetings at strip clubs, and a new life in the heart of the Midwest. In LET ME IN, Koyama shares the true story of how she fought her way through the corporate jungle before the term 'glass ceiling' was even coined.

'Among the first women to blaze trails through America's boys' club of business, Elaine's story is our American story, as well as the modern history of American business.' Ann Swanson, PhD, International Baccalaureate consultant.

Elaine Koyama grew up on a sheep, wheat and sugar beet farm in eastern Montana. She is the youngest of eight sansei (third-generation) Japanese Americans. She spent twenty years at Cargill, twenty years as an entrepreneur, and plans on spending the next twenty years writing.

The mother of three adult children, Elaine, with her Yorkie-poo Kiba, now splits her time between Miltona and Minneapolis (though she considers Hardin, Montana home). Visit www.elainekoyama.com to follow her blog, Musings of an UnGeisha and learn more about her writing workshops, Retreat2Write.

LET ME IN: a Japanese American Woman Crashes the Corporate Club 1976-1996