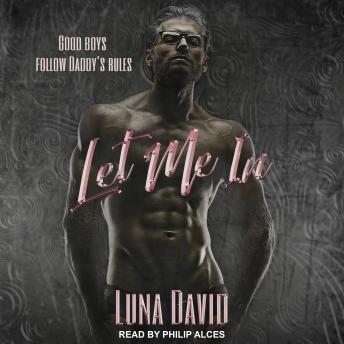 Forced to grow up too fast, Liam Cavanagh, carries the burdens of responsibilities that shouldn't be his, and it's slowly destroying him. The more he tries to control, the more out of control he feels. When he gets a hit on a personal ad he placed, he shrugs it off as impossible. With nearly 600 miles between him and Daddy Cash he thought the odds were stacked against them until Cash's current boy convinces him otherwise and persuades Liam to take on the role of Daddy's new boy.

Saying forty-year-old entrepreneur Cash Moreau is having a bad week is an understatement. The man he's been with for years leaves him for a new job, his own company is in crisis, and to top it all off, a young stranger shows up on his doorstep with all his worldly possessions, claiming to be his new boy. Liam wants a Daddy to depend on, and Cash refuses to believe he's what's best for Liam.

Despite their powerful connection, Cash finally pushes Liam away, and the beautiful boy who stole his heart disappears. Soon, Cash realizes what he's let slip through his fingers. Suddenly Cash will move heaven and earth to find what he's lost.

I loves this book in print and I wasn’t disappointed in this production. I don’t often like Daddy Kink because I think of a man playing a baby. But this wasn’t like that. It was a May December romance with a twist. Easy to follow and the Boy has backbone and wasn’t whining the whole time. The side characters are amazing and set up the other books easily. Great audiobook. I know you will enjoy listening to it.

This was a sensitively told story based on a specific lifestyle which captured the characters and back stories well. A single narrator for multiple voices worked for this book.

daddy kink is not my normal but this book is very well written and is worth the listen. if you can listen with an open mind. i recommend trying