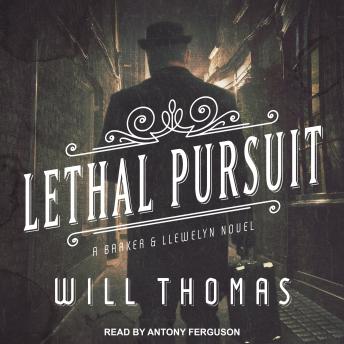 London, 1892-Cyrus Barker is brought into a game of international espionage by the Prime Minister himself in the newest mystery in Will Thomas's beloved series.

Private enquiry agents Cyrus Barker and Thomas Llewelyn receive in the mail an unexplained key stamped with the letter Q. Barker, recognizing it for what it is, uses the key to unlock an anonymous door in the alleyway, which opens to an underground tunnel leading to Downing Street.

The Prime Minister has a small task for Cyrus Barker. A Foreign Office agent stole a satchel in Eastern Europe, but was then himself murdered at Charing Cross. The satchel contains a document desperately wanted by the German government, but while the agent was killed, the satchel remains in English hands. With a cold war brewing between England and Germany, it's in England's interest to return the document contained in the satchel to its original owners and keep it out of German hands.

The document is an unnamed first century gospel; the original owner is the Vatican. And the German government isn't the only group trying to get possession of it. With secret societies, government assassins, political groups, and shadowy figures of all sorts doing everything they can-attacks, murders, counter-attacks, and even massive street battles-to acquire the satchel and its contents, this small task might be beyond even the prodigious talents of Cyrus Barker.