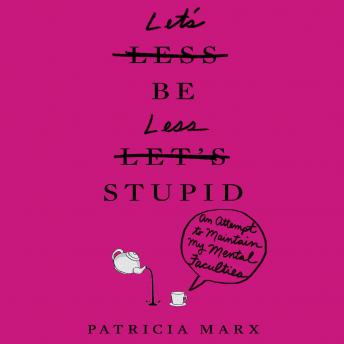 Let's Be Less Stupid: An Attempt to Maintain My Mental Faculties

Former SNL writer and The New Yorker staffer Patty Marx employs the weapon she wields best--not that weapon; Patty believes in gun control. Instead, she uses her sharp-edged humor to tackle the most difficult facet of aging: the mind's decline. From forgetting her brother-in-law's name while he was wearing a nametag to hanging up the phone to look for her phone, Marx confesses to her failures, and not only to make you feel better about yourself.

In Let's Be Less Stupid Patty addresses troubling conundrums, such as: If there are more neural connections in your brain than stars in the Milky Way, why did you put the butter dish in your nightstand drawer? Patty's quest to get smarter includes just about everything: learning Cherokee, popping pills (not the good kind), and listening to--who's the guy who didn't write dum de de dum but the other one?

Let's Be Less Stupid: An Attempt to Maintain My Mental Faculties