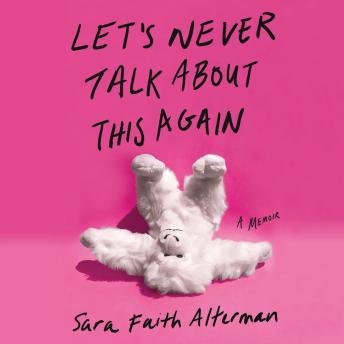 Let's Never Talk About This Again: A Memoir

Twelve-year-old Sara enjoyed an G-rated existence in suburban New England, filled with over-the-top birthday cakes, Revolutionary War reenactments, and nerdy word games invented by her prudish father, Ira. But Sara's world changed for the icky when she discovered that Ira had been shielding her from the truth: that he was a campy sex writer who'd sold millions of books in multiple languages, including the wildly popular Games You Can Play with Your Pussy. Which was, to the naïve Sara's horror, not a book about cats. For decades the books remained an unspoken family secret, until Ira developed early onset Alzheimer's disease . . . and announced he'd be reviving his writing career. With Sara's help.
In this cringeworthy, hilarious, and moving memoir, Sara shares the profound experience of discovering new facets of her father; once as a child, and again as an adult. Let's Never Talk About This Again is a must-read confessional from a woman who spent years trying to find humor in the perverse and optimism in the darkness, and succeeded.

Let's Never Talk About This Again: A Memoir