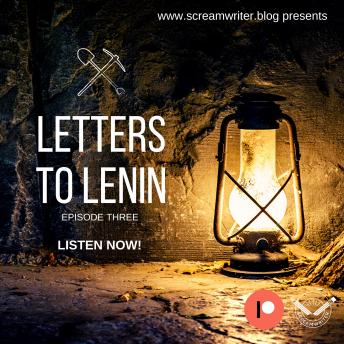 Letters To Lenin - Episode Three: A Story That Begins In Russia Makes Its Way To Salford

“The bourgeoisie cannot exist without constantly revolutionising the instruments of production, and thereby the relations of production, and with them the whole relations of society.”― Friedrich Engels, The Communist Manifesto (1848)Nikolai meets reporter Solomon Credge hoping he will help them publish an article about the communist movements strike. Credge threatens to blackmail Nikolai after having heard of his notoriety back in Russia, and the expensive bounty on his head. Credge warns Nikolai of spies within his ranks, paid by Clemence Reed to disband the strike from the inside. Bernard tells Nikolai Clemence Reed has paid scabs to go back to work, one of which is Oliver Spinks.

Nikolai asks Nancy to elope with him to Russia. Nikolai and Bernard discover a dead Oliver Spinks. Nikolai and Bernard are told by Gregor that Oliver was murdered earlier and found in the mines. They suspect Clemence Reed ordered one of his spies to murder Spinks and make it look like a miner to disband the strike. Nikolai decides to hide Oliver's body in the mine and claim he was buried in a cave until they can catch the killer to preserve the strike. Now with a murderer within their ranks, will the men be able to trust each other as the country revolutionises against corrupt capitalist industry?

Tension's run even higher in this electric third instalment of the Letters to Lenin series. A tale of betrayals, love, loyalty and the birth of a new political era.

Letters To Lenin - Episode Three: A Story That Begins In Russia Makes Its Way To Salford