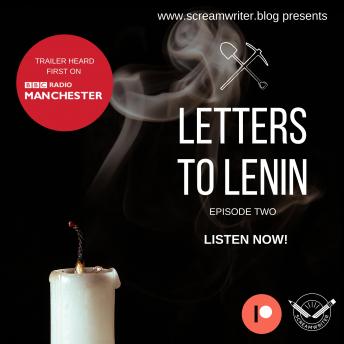 Letters To Lenin - Episode Two: A Story That Begins In Russia Makes Its Way To Salford

'Let the ruling classes tremble at a Communist revolution. The Proletarians have nothing to lose but their chains. They have a world to win. Working men of ALL countries, Unite!' - Marx & Engels, Communist Manifesto (1848)As we rejoin the Salford mining community in the darkest time of British poverty, Oliver Spinks reveals that Horace Sampson’s family will not receive any compensation because of a new policy loophole leaving the family on the breadline. The men agree to give up a portion of their wage for the Sampson’s until they can appeal for the money on Horace behalf. Nikolai talks to Karl Marx and Friedrich Engles about their new book, the Communist Manifesto.

Nancy tells Nikolai, Hugo has warned her to stay away from him due to Nikolai’s terrorist past. Nikolai reveals his reason for joining the student revolution against Russia's royalist rule.

Nikolai convinces the miners to become communists and go on strike. He approaches Marx and Engels in hopes that they will back their cause, and provide a way to advertise their strike across the country. Marx and Engels agree to put Nikolai in contact with an underhanded journalist named Solomon Credge.

In Russia, Vladimir Ulyanov hides his brother Aleksandr Ulyanov from the Russian police hunting him for the attempted assassination of the Tsar. Aleksandr is outraged at a local paper filled with slander about the Ulyanov family, including a rumour that Aleksandr's true father was the failed assassin Dmitri Karakazov, whom also attempted to murder the Tsar twenty years before his execution for treason. Aleksandr tells Vladimir he has read ‘ The Communist Manifesto’ sent to him by Nikolai and has fallen in love with the philosophy. He pleads with Vladimir to read the book for all that Aleksandr believes in is between its pages.

Letters To Lenin - Episode Two: A Story That Begins In Russia Makes Its Way To Salford