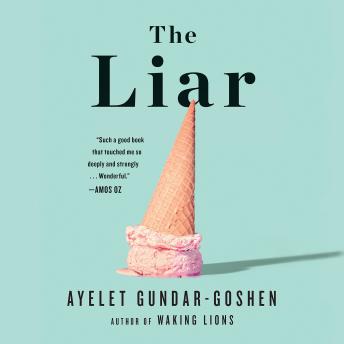 This 'brilliant' novel, an Elle Magazine Best Book of the Year about 'lying and the lure of fame' (Joan Siber, National Book Critics Circle and PEN/Faulkner award-winning author), reveals how one mistake can have a thousand consequences.
Nofar is an average teenage girl -- so average, in fact, that she's almost invisible. Serving customers ice cream all summer long, she is desperate for some kind of escape.

One afternoon, a terrible lie slips from her tongue. And suddenly everyone wants to talk to her: the press, her schoolmates, and even the boy upstairs. He is the only one who knows the truth, and he is demanding a price for his silence.

Then Nofar meets Raymonde, an elderly immigrant whose best friend has just died. Raymonde keeps her friend alive the only way she knows how, by inhabiting her stories. But soon, Raymonde's lies take on a life of their own.

Written with propulsive energy, dark humor, and deep insight, The Liar reveals the far-reaching consequences of even our smallest choices, and explores the hidden corners of human nature to reveal the liar, and the truth-teller, in all of us.