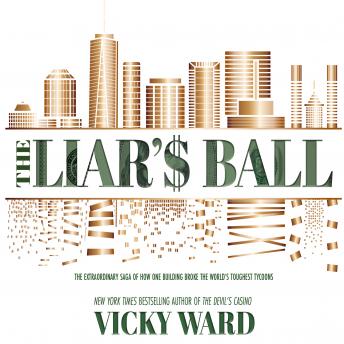 The Liar's Ball: The Extraordinary Saga of How One Building Broke the World's Toughest Tycoons

Harry Macklowe is one of the most notorious wheelers and dealers of the real-estate world, and The Liar's Ball is the story of the gamblers and thieves who populate his world. Watch as Harry makes the gutsy bid for midtown Manhattan's famous GM building and puts almost no money down, landing the billion-dollar transaction that made him the poster child for New York's real-estate royalty. Listen in on the secret conversations, back-door deals, and blackmail that put Macklowe and his cronies on top-and set them up for an enormous fall. Discover how Harry Macklowe ruthlessly clawed his way to the top with the help of his loyal followers, each grubbing for a piece of the real-estate pie. In this is a real-life tale of extravagance, ambition, and power, Vanity Fair contributing editor Vicky Ward skillfully paints the often scandalous picture of the giants who owned the New York skyline until their empires came crumbling down in the 2008 financial crisis, revealing their secrets and telling the tale of business as usual for this group-lying, backstabbing, and moving in for the kill when things look patchy. Based on more than 200 interviews with real-estate moguls like Donald Trump, William Zeckendorf, Mort Zuckerman, and David Simon, Liar's Ball is the never-before-told story of the egomaniacal elites of New York City.

Liar's Ball: The Extraordinary Saga of How One Building Broke the World's Toughest Tycoons

This title is due for release on April 6, 2020
We'll send you an email as soon as it is available!