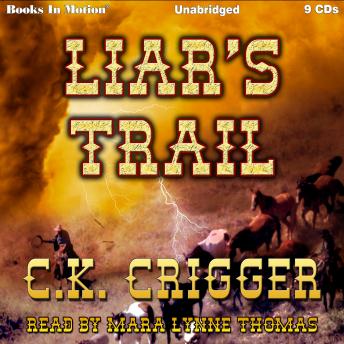 Young Gincy Tate's father is murdered before he can fulfill a contract to supply the Army with remounts. In order to pay his debts and save the ranch, she must make the sale in his place. Afraid the lien-holder, whom she suspects of being the murderer, will foreclose before June 7, 1883, she tells no one Morris Tate is dead. Instead, she says he is here, there, or elsewhere. Gincy hires two cowboys to help trail the herd to Fort Spokane. One is on the murderer's payroll, but Sawyer Kennett hires on because he has decided Gincy is the woman for him. With an old Indian, who is her shirttail relative, the group battles storm, stampede and sabotage to win their way to the fort and sell the herd. Then Gincy must make it home in time to beat the foreclosure and confront her father's murderer-but only if Sawyer is the man she prays he is.