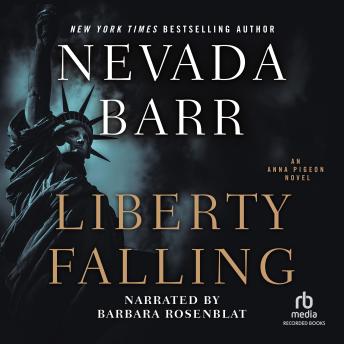 Award-winning novelist Nevada Barr sends her remarkable sleuth, Ranger Anna Pigeon, to spectacular national parks to solve baffling crimes. In Liberty Falling, Anna leaves the rugged countryside of Colorado to face the concrete wilds of New York City. As soon as she hears her older sister is gravely ill, Anna rushes to the Big Apple to sit at her bedside. Between hospital visits, she relaxes at the park service quarters on Liberty Island and explores the crumbling ruins of Ellis Island where thousands of immigrants once were processed. Rest escapes her, however, when a teenage girl mysteriously plunges to her death from the Statue of Liberty-and Anna herself suffers a dangerous tumble. The Park Service claims the falls could only be accidents, but Anna wonders if there is a common purpose behind them. Nevada Barr's vivid descriptions and narrator Barbara Rosenblat's dramatic performance transport you to New York City to share in all the danger and the excitement.

This title is due for release on June 13, 2008
We'll send you an email as soon as it is available!